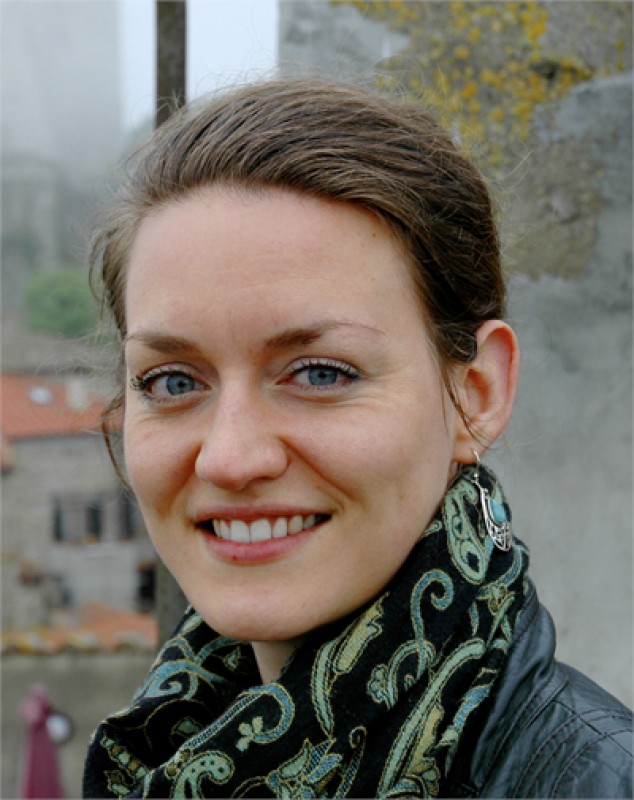 Spring 2021 was an exciting time for pelvis research.

Our postdoc fellow Nicole Grunstra co-authored four new papers on the evolution of the human pelvis and birth canal. Three of these papers showed, respectively, that sex differences in the pelvis did not evolve de novo in modern humans (Nature Ecology and Evolution), that biomechanical tradeoffs in the pelvic floor constrain the evolution of the human birth canal (PNAS), and that population differences in human pelvic form evolved by selection, rejecting the null hypothesis that it was purely the result of drift (BMSAP). The final paper is a careful re-assessment of the obstetrical dilemma hypothesis (Biological Reviews), which we covered in a recent interview with Nicole.

Enjoy these papers and check out the outreach Twitter threads from Nicole herself here, here, here, and here!

Abstracts of the papers:

It is commonly assumed that the strong sexual dimorphism of the human pelvis evolved for delivering the relatively large human foetuses. Here we compare pelvic sex differences across modern humans and chimpanzees using a comprehensive geometric morphometric approach. Even though the magnitude of sex differences in pelvis shape was two times larger in humans than in chimpanzees, we found that the pattern is almost identical in the two species. We conclude that this pattern of pelvic sex differences did not evolve de novo in modern humans and must have been present in the common ancestor of humans and chimpanzees, and thus also in the extinct Homo species. We further suggest that this shared pattern was already present in early mammals and propose a hypothesis of facilitated variation as an explanation: the conserved mammalian endocrine system strongly constrains the evolution of the pattern of pelvic differences but enables rapid evolutionary change of the magnitude of sexual dimorphism, which in turn facilitated the rapid increase in hominin brain size.

Compared with most other primates, humans are characterized by a tight fit between the maternal birth canal and the fetal head, leading to a relatively high risk of neonatal and maternal mortality and morbidities. Obstetric selection is thought to favor a spacious birth canal, whereas the source for opposing selection is frequently assumed to relate to bipedal locomotion. Another, yet underinvestigated, hypothesis is that a more expansive birth canal suspends the soft tissue of the pelvic floor across a larger area, which is disadvantageous for continence and support of the weight of the inner organs and fetus. To test this “pelvic floor hypothesis,” we generated a finite element model of the human female pelvic floor and varied its radial size and thickness while keeping all else constant. This allowed us to study the effect of pelvic geometry on pelvic floor deflection (i.e., the amount of bending from the original position) and tissue stresses and stretches. Deflection grew disproportionately fast with increasing radial size, and stresses and stretches also increased. By contrast, an increase in thickness increased pelvic floor stiffness (i.e., the resistance to deformation), which reduced deflection but was unable to fully compensate for the effect of increasing radial size. Moreover, larger thicknesses increase the intra-abdominal pressure necessary for childbirth. Our results support the pelvic floor hypothesis and evince functional trade-offs affecting not only the size of the birth canal but also the thickness and stiffness of the pelvic floor.

Did population differences in human pelvic form evolve by drift or selection?

Pelvic dimensions differ, on average, among modern human populations. Some recent studies have reported that population differences in pelvic form evolved mainly by neutral processes, without considerable natural selection. This is a surprising claim given the many important functions of the human pelvis. This article re-evaluates this claim through a review of the medical literature and a new analysis of the data from which these results were obtained. We show that variation in modern pelvic form correlates with the risks of obstructed labour, pelvic floor disorders such as incontinence and prolapse, and numerous orthopaedic disorders that impair walking. Comparative population studies also document adaptations of human body form and pelvic dimensions to climatic conditions. However, these various and partly antagonistic selective forces on the human pelvis are not homogeneous across populations. They depend not only on climatic differences, but also on maternal and foetal body size, pelvic floor tissue properties, diet, lifestyle and the resulting metabolic capacities, as well as on obstetric practices and health care, all of which vary across human populations. Given the relatively rapid evolution of polygenic quantitative traits, we propose that pelvic dimensions have evolved different "compromise solutions" in different populations in response to local selective regimes. The results from a reanalysis of a large published global dataset on human pelvic canal dimensions clearly support this view.

The obstetrical dilemma hypothesis: there's life in the old dog yet 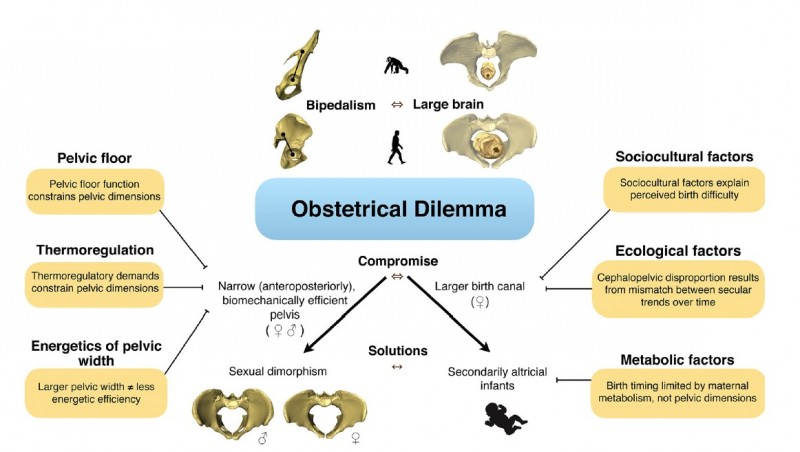 The term ‘obstetrical dilemma’ was coined by Washburn in 1960 to describe the trade-off between selection for a larger birth canal, permitting successful passage of a big-brained human neonate, and the smaller pelvic dimensions required for bipedal locomotion. His suggested solution to these antagonistic pressures was to give birth prematurely, explaining the unusual degree of neurological and physical immaturity, or secondary altriciality, observed in human infants. This proposed trade-off has traditionally been offered as the predominant evolutionary explanation for why human childbirth is so challenging, and inherently risky, compared to that of other primates. This perceived difficulty is likely due to the tight fit of fetal to maternal pelvic dimensions along with the convoluted shape of the birth canal and a comparatively low degree of ligamentous flexibility. Although the ideas combined under the obstetrical dilemma hypothesis originated almost a century ago, they have received renewed attention and empirical scrutiny in the last decade, with some researchers advocating complete rejection of the hypothesis and its assumptions. However, the hypothesis is complex because it presently captures several, mutually non-exclusive ideas: (i) there is an evolutionary trade-off resulting from opposing selection pressures on the pelvis; (ii) selection favouring a narrow pelvis specifically derives from bipedalism; (iii) human neonates are secondarily altricial because they are born relatively immature to ensure that they fit through the maternal bony pelvis; (iv) as a corollary to the asymmetric selection pressure for a spacious birth canal in females, humans evolved pronounced sexual dimorphism of pelvic shape. Recently, the hypothesis has been challenged on both empirical and theoretical grounds. Here, we appraise the original ideas captured under the ‘obstetrical dilemma’ and their subsequent evolution. We also evaluate complementary and alternative explanations for a tight fetopelvic fit and obstructed labour, including ecological factors related to nutrition and thermoregulation, constraints imposed by the stability of the pelvic floor or by maternal and fetal metabolism, the energetics of bipedalism, and variability in pelvic shape. This reveals that human childbirth is affected by a complex combination of evolutionary, ecological, and biocultural factors, which variably constrain maternal pelvic form and fetal growth. Our review demonstrates that it is unwarranted to reject the obstetrical dilemma hypothesis entirely because several of its fundamental assumptions have not been successfully discounted despite claims to the contrary. As such, the obstetrical dilemma remains a tenable hypothesis that can be used productively to guide evolutionary research.