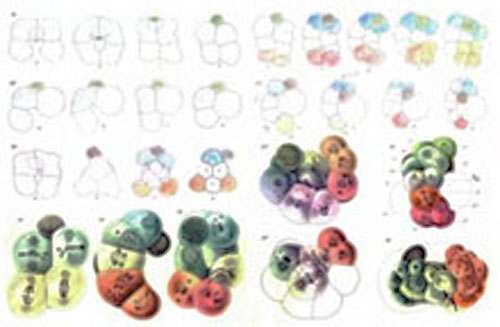 Cooperative Event
Graphing Genes, Cells and Embryos
Stazione Zoologica Anton Dohrn, Naples (Italy)
Organized by S. Brauckmann (Estonian Univ. of Life Sciences), C. Brandt (MPI for the History of Science), D. Thieffry (Univ. Méditerranée), G. Müller (Univ. of Vienna), Stazione Zoologica A. Dohrn, and the KLI
An important feature of the life sciences is that they always have visualized their objects to a greater extent than physics or chemistry. Since the early 19th century one extensively used hand-drawings, professional illustrations, idealized diagrams, microphotography, and, in the 20th century, time-lapse motion pictures to visualize the data and to support one´s own analyses. Nowadays the techniques expanded to video and digital imaging, including virtual reality dissections and rotating panoramas of embryonic features. In general, these scientific images are means to store and exchange experimental data and to further specialized knowledge of biological objects. The objects are either an individual, like an embryo or egg, a cell or gene, or sets of individuals like animals, plants, forests, or meadows. What distinguishes them from physical entities are the facts that they are visually flexible phenomena whose boundaries, extension and identifying details are studied to explain life´s dynamics and such processes like embryogenesis, cell morphologies, or genes´ networking. To capture this visual specificity of the life sciences, the workshops will focus (1) on the biological material considered in priority, e.g. embryos, cells, and genes, (2) on the type of graphical representations used, e.g. fate maps, cell lineages, or gene networks, and (3) on the techniques employed to construct these graphs, e.g. hand drawings, diagrams, tables, microphotographs, time-lapse motion pictures, or computer imaging. This workshop brings to an issue the production of biological knowledge on embryos, cells, and genes from the early 19th to in silico biology. For it, we will compare the graphic models of classical disciplines evoking lifelike images within the mind, like embryology and cytology to most recent computer imaging techniques. In terms of methodology we want to foster true interdisciplinary work and communication, in particular combining experts from the biological sciences and the humanities (history and philosophy of sciences). Our discussions will serve several objectives. For example, we will study biological objects and follow their traces in different disciplines over time, we will examine the tools by which biologists visualized their observations, and how they trained themselves to ´observe´ and to ´imagine´ the phenomenal forms of biological bodies. Further we will elucidate in detail which experimental procedures schooled the scientists to coordinate eyes and hands when redrawing over and over again images of cells pushing against each other, or fixing the boundaries of embryonic layers, permanently moving and shifting their position inside an embryo. Other epistemic questions we want to address here are how the ´graphs´ relate to the experiments in question, or how the images changed when more data accumulated. For, the workshops attempt to underline the role of images as a vehicle of how the scientists comprehend the object or phenomenon in question, and of how they differentiate or unify biological diversity in coherent theories. Indeed, scientific images do not map experimental reality in a one-to-one correspondence because they result from a complex process of production and transformation. In other words, scientific images are models. During the workshops biologists and scholars of science studies will elucidate to what extent the images have served and still serve the biologists to perceive and to cognize living entities. Thus, we will also talk in detail on the scientist´s perceptive habit and the ambiguity of observing epistemic objects, which are at the same time subjects changing their shape in time and space. The interdisciplinary participants will offer a variety of foci when presenting the practicer of scientific visualization, discussing the function and modi of visual representation, or delimiting the role that images can play in accepting a new theory.
Download Document