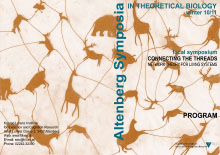 Focal Symposia
Connecting the Threads – Network Theory for Living Systems
Universitätszentrum Althanstraße, Biozentrum, University of Vienna, Austria
Organized by KLI for Evolution and Cognition Research, Altenberg, Austria and the Department of Theoretical Biology, University of Vienna, Austria
Networks exist at all levels of biological organization, from genes and proteins that interact through mutual regulation over interacting individuals of a population to interacting species in ecosystems. The study of networks and their properties has, therefore, been a rapidly growing field in different biological disciplines — from genetics, via population biology and behavioral ecology to evolutionary biology and ecology. In population genetics early models of evolutionary processes were based on simplifying assumptions of idealized well-mixed populations. For simplicity it was assumed that all individuals were equally likely to interact and reproduce with each other. The resulting models of evolutionary dynamics, were very educative and indispensable for our understanding of evolutionary processes. Yet, as natural populations do not comply with these assumptions, a next generation of models, incorporated aspects of population structure. More recently, population ecologists have turned to a different approach and model populations as graphs, which allows one to study any possible population structure within a single framework. In parallel to the developments in evolutionary biology and population genetics, behavioral ecologists have picked up graphs as their method of choice to represent social groups of animals. Again, the idea is to represent social groups as graphs, allowing analyses of animal sociality that were impossible with conventional individual-focused approaches. In ecology, network thinking has a considerable tradition, as already some of the founding fathers of modern ecology used network representations and terminology to describe trophic networks or ´food webs´. Ecologists have started to assess how the removal of species or their replacement by introduced invaders can alter the trophic network structure. Studies on other kinds of species interactions, such as those between plants and their animal pollinators and seed dispersers, have also benefited from the network approach. Networks turned out to be a useful tool to tackle full communities of pollination mutualisms, and to study how conglomerates of species, rather than only pairs of species, co-evolve. The first networks at the molecular level were described over 50 years ago by Donald Nicholson. With the development of fast and highly efficient molecular methods researchers can now characterize complete protein–protein interaction networks and gene regulatory networks. One of the most striking findings in this area is the conservation of network features over millions of years. Furthermore, recent studies demonstrated that the position of proteins within a network has important evolutionary consequences. Highly connected proteins in the protein interaction network are more likely to be essential for survival, evolve more slowly and are less likely to be lost over evolutionary time. As with any other new methodological framework, the question is to what extent we are making real progress in understanding biological and evolutionary processes or whether we are just telling the same stories with fancy new words. Obviously, network approaches can help us to focus on aspects of population structure that cannot be inferred from observing single individual or dyadic interactions alone. Despite the growing number of recent network studies, we are still in the descriptive ´natural history´ phase of this field, discovering the basic structure of biological networks at a variety of scales. In the next phase empirical studies have to provide the motivating details for novel, concept- driven theory and theoretical work must provide a rigorous predictive framework specifically tailored for an evolutionary setting in order to test hypotheses about network formation and network function. In other words, the challenges for the future are to understand (1) how evolutionary forces shape network structure, and (2) how network structure affects evolutionary processes.
Download Document