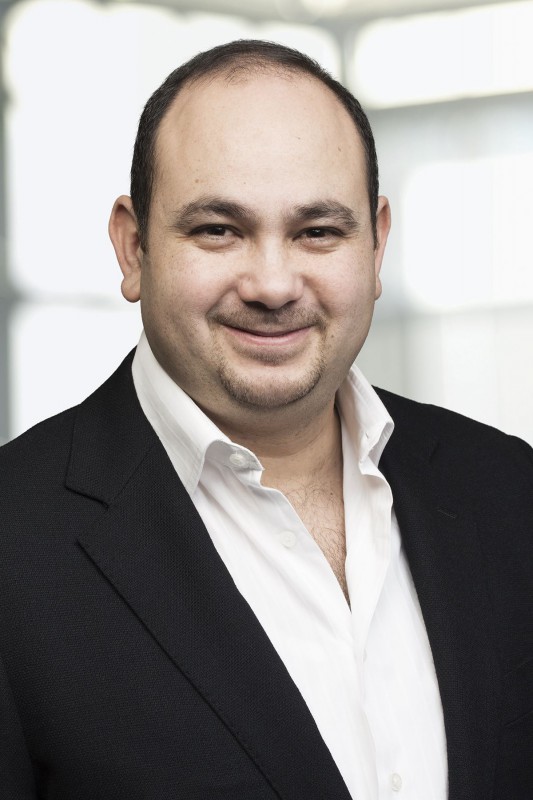 Major transitions in evolution, including the transition to obligate endosymbiosis, represent an increase in biological complexity through the integration of independently replicating units into a single, higher-level, replicating unit. Yet, the evolutionary developmental steps underlying this integration remain unknown. The major transition to obligate symbiosis between the hyperdiverse genus Camponotus (carpenter ants) and the bacteria Blochmannia evolved ~40 MYA, where Blochmannia now provides nutrition and immunity and Camponotus ensures vertical transmission through its germplasm. In all ants, a single germplasm at the posterior pole of the embryo simultaneously specifies both the germline and posterior axis. Here we show that this transition to obligate symbiosis evolved in two steps, both of which occurred through the duplication of germplasm followed by its functional divergence. Blochmannia induced the first duplication event by inducing maternal expression of Hox genes ultrabithorax and abdominal-A within the ancestral germplasm. This led to a division of labour between each duplicate, where the ancestral germplasm now functions only as the germline, while in the first duplicate these Hox genes were re-wired allowing it to function only in specifying the embryonic posterior in a novel location. Blochmannia also induced the second duplication event resulting in the co-option of the ancestral germplasm to localize Blochmannia into bacteriocytes, while the second duplicate diverged to function as a novel germline. We propose that environmentally-induced duplication of pre-existing cells, organs, or individuals followed by divergence of ancient genes allowing each duplicate to take on novel functions may be a general pathway to major evolutionary transitions.

Ehab Abouheif is James McGill Professor and John Simon Guggenheim Fellow at McGill University in Montreal, Canada. He served as President of the Pan-American Society for Evolutionary Developmental Biology from 2013-2015, and is currently Past-President until 2017. He obtained his PhD from Duke University in 2002 under the direction of Gregory A. Wray, and from 2002-2004, was HHMI Postdoctoral Fellow at the University of Chicago and the University of California, Berkeley with Nipam H. Patel. In 2004, he returned home to join the Department of Biology at McGill University as Canada Research Chair in Evolutionary Developmental Biology. Professor Abouheif works at the intersection of ecology, evolutionary and developmental biology (also known as eco-evo-devo). Using the complex societies of ants as a model his lab works to uncover the rules by which genes and environment interact during development and evolution.