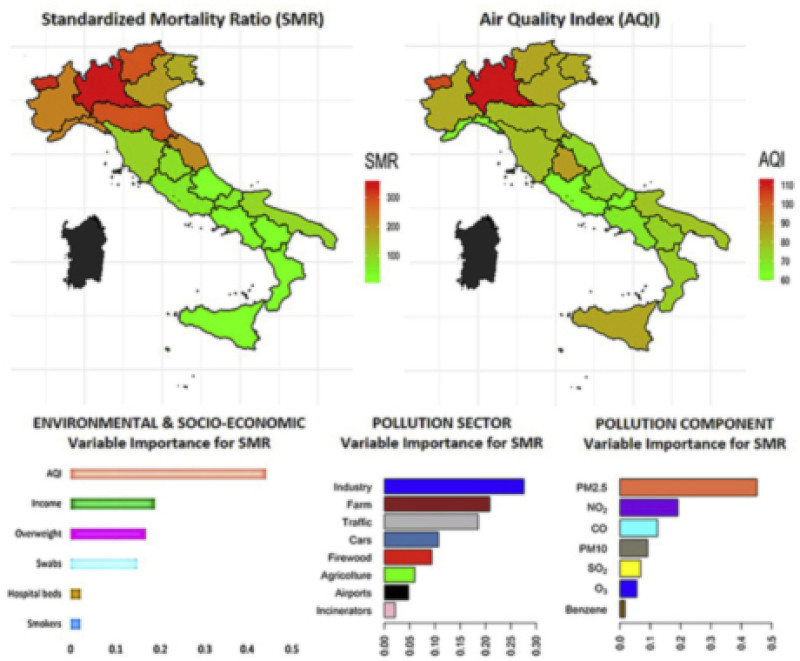 That air pollution can increase the risk of respiratory diseases by enhancing susceptibility to viral and bacterial infections is nothing new. Some studies have suggested that small particles in the air facilitate the spread of viruses and even the new coronavirus, in addition to direct person-to-person infection. However, despite some preliminary hypotheses, the effects of prolonged exposure to particulates and other atmospheric contaminants on SARS-CoV-2 have not been studied.

An international team made up of the biologists dr. Roberto Cazzolla Gatti (research fellow of the Konrad Lorenz Institute for Evolution and Cognition Research in Austria and associate professor at Tomsk State University in Russia) and Dr. Alena Velichevskaya (researcher at Tomsk State University in Russia) and the physicists from the University of Studies in Bari and the Bari section of the National Institute for Nuclear Physics (INFN) dott. Nicola Amoroso, dr. Alfonso Monaco and dr. Andrea Tateo revealed, in the first scientific study concerning the Italian situation published after having also passed the peer-review phase, that at national level there is a significant statistical association between the prolonged exposure to air pollutants and the severity of the pandemic effects (mortality and infectivity) of the SARS-CoV-2 virus.

The study, just published by the prestigious scientific journal Environmental Pollution (https://doi.org/10.1016/j.envpol.2020.115471), leader in the field of research on the effects of pollution on the environment and health, examines the possible reasons for which the new coronavirus has had a more severe impact on some Italian regional and provincial populations and less on others. The research revealed what many already feared, namely that between various environmental (such as the presence of contaminants produced by industries, farms, road traffic, etc.), health (such as obesity, cigarette smoking, availability of hospital beds, number of swabs, etc.) and socio-economic (such as, for example, the average annual income per family) factors, air pollution and fine particulate matter (PM2.5) - much more than other pollutants such as PM10, ozone, sulfur and nitrogen oxides, etc. - are the most important in predicting the effects of SARS-CoV-2.

“Air pollution is the factor that more than all the others may have influenced the mortality and positivity rates of the SARS-CoV-2 epidemic in Italy" state the authors of the study. "We have also discovered - they continue - that emissions from industries, intensive livestock farming and road traffic, in order of importance, could be responsible for over 70% of COVID-19 deaths nationwide”. Using artificial intelligence models, the team was able to "predict" the values ??of both the trend of infections and mortality with an accuracy of over 95%. Based on these models, the scientists also estimated that a small future increase in pollution levels (of 5-10%) could be associated with an increase in health effects due to pathogens similar to the SARS-CoV-2 virus by up to 30% (whose about 4-14% of more potential deaths).

Considering that over three-quarters of COVID-19 associated deaths in the first half of 2020 in Italy were reported in the northern regions, the results of this study clearly demonstrate that the large presence of factories, industrialized areas and factory farms plays an important role in the health effects of SARS-CoV-2 and that the excess mortality from COVID-19 due to air pollution in northern Italy is not accidental. North-western Italy, which includes the first national industrial triangle (also called To-Mi-Ge) corresponding to the summits of Turin, Milan and Genoa, is the area where an extensive industrial development took place between the end of the nineteenth century and early twentieth century. According to a report published in 2019 by the European Environment Agency (Air quality in Europe, 2018), the Po Valley, i.e. the area between the Alps, the northern Apennines and the Adriatic Sea, is the region most affected by the concentration of atmospheric pollutants in the whole of Europe.

Thanks to the computing power provided by the ReCaS datacenter of the University of Bari & of the National Institute of Nuclear Physics, the second Italian computing center for the capacity of calculation, the new study was also able to detect how some provinces recorded abnormal rates of mortality compared to what was predicted by the artificial intelligence model: 5 provinces in northern Italy (Cremona, Lodi, Piacenza, Bergamo and Brescia) showed an excess of cases compared to those predicted by the respective pollution level, confirming that other local and additional causes may have aggravated the health effects of the coronavirus. In the south, however, the province of Syracuse above all, followed by those of Taranto, Trapani and Agrigento showed a lack of observed cases compared to those expected, a result that should stimulate local administrators to reduce the air pollution of the administered provinces to contain the immediate and future risk of aggravating the effects of respiratory epidemics.

The results of this brand new study, which used the complex algorithms of artificial intelligence to evaluate numerous factors at the same time, show that the imperative of productivity, economic growth and industrial development put before people's health and environmental protection is, in fact, a short-sighted idea, with serious repercussions in the present and an issue of serious concern for the near future.