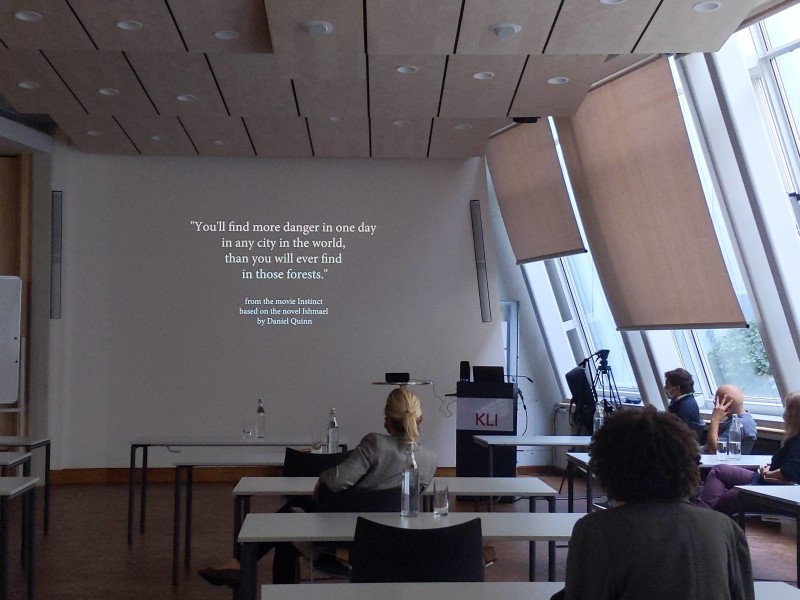 "Ivindo" screening at the KLI
2020-10-23
We will give the forest a voice! Documentary watch with director Roberto Cazzolla Gatti

"We will give the forest a voice." Ivindo National Park is one of the last forests relatively untouched by humankind. As multiple nations jostle to take control over this land and exploit its resources, KLI research fellow and ecologist Roberto Cazzolla Gatti and his team embarked on a one-month journey with a single mission in mind: to give it a voice.

On October 8th, 2020, fellows at the KLI experienced the breathtaking result— an epic documentary of a 150 km expedition, on foot, through unmapped territory from north to south of the national park.

“Ivindo: a journey into the green heart of Africa”

Why go through such hardships to document the diversity and richness of Ivindo? The idea stemmed from discussions between Roberto and the coordinator of the FIGET foundation (Fondation Internationale Gabon Eco-tourisme) while Roberto was collecting data in Gabon (Central Africa). The hope is that a visceral appreciation of the forests can bring the kind of understanding and funding that can protect the habitat from global threats and preserve it for generations to come. Following the path of an actual exploration will allow a global audience to connect to the fragile beauty and importance of this magnificent land. Roberto and his team can demonstration that such a trip is in fact doable, thus attracting researchers and eco-tourists to devote more resources and attention to Ivindo National Park.

Convinced by this plan, the FIGET foundation supported the costs for six ecoguides from Parcs Gabon and an Italian photographer to accompany Roberto’s journey. Such local knowledge was essential to overcome the extraordinary challenges of the month-long journey through swamps and humid forests, as they hiked across hills and crossed difficult rivers, removing leeches and ticks along the way.

Roberto’s camera captured rare footage of playful wildlife and previously under-documented species. A unique but central principle of the editing process was to ensure that the locals are the main characters of their own stories, that scientific knowledge and filming technologies were brought in to engage with local knowledge and needs. It was particularly touching, when the film was produced, to see how emotional the local ecoguides were as they watched themselves on the big screen. Many have never even seen themselves in a mirror or a video before, so to witness themselves on film was a transformative experience that touched the entire crew.

Sponsorship for the project was extremely difficult to find as the market for wildlife documentaries is now nearly non-existent. The filming team led by Roberto thus documented, filmed, and edited the documentary for free into 2D and 3D formats. And now they are here for you to enjoy as well!

And in 3D here: https://youtu.be/G7sJqKYdSX8

If you are interested in licensing rights to footage of this film or for television broadcast (also in 3D-UHD version), please send a request to videophoto@robertocazzollagatti.com