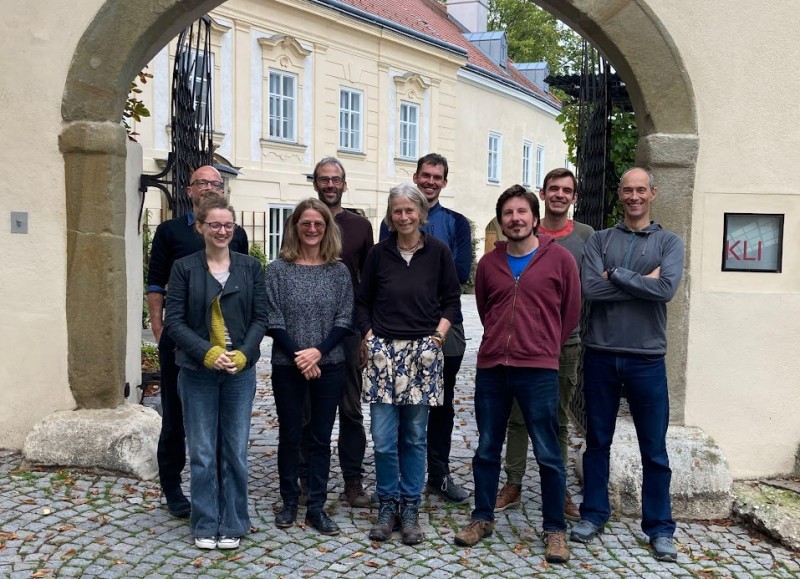 The working group
2022-10-04
Report from the 2nd meeting of the KLI working group: Evolutionary theory for social-ecological change

Another session of the working group “Evolutionary Theories for Social-Ecological Change” concluded after a productive week at the KLI. The goal of this visit was to bring group members together to finalize a perspective paper that explores what evolutionary theory could contribute to the field of Social-Ecological Systems thinking and to further expand on this work. Prof. Tim Waring, Prof. Maja Schlüter, Prof. Monique Borgerhoff Mulder, Dr. Peter Søgaard Jørgensen, and Dr. Guido Caniglia were able to reconnect following their previous visit to the institute in March earlier this year. Dr. Jamila Haider and Dr. Carl Folke could not attend in person, but joined the discussion digitally for a day. Three new researchers, Prof. Alessandro Tavoni, Prof. Thomas Currie, and Dr. Laurel Fogarty joined the team and brought a fresh perspective, new insights, and a heap of relevant expertise for the work that was laying ahead. Raf Jansen, a research assistant, helped with organizing the paper and documented the event.

What followed was a week of debate, hard work, and camaraderie, in which much progress was made. Led by Prof. Waring, the group developed an integrative paper on the process and challenges of integrating social-ecological systems research with evolutionary theory, and managed to get a significant amount of writing done. Furthermore, the spacious rooms and beautiful garden of the KLI made for a great location to have discussions in smaller groups, which helped generate fresh ideas for prospective papers.

Below is a report of the workshop in pictures. 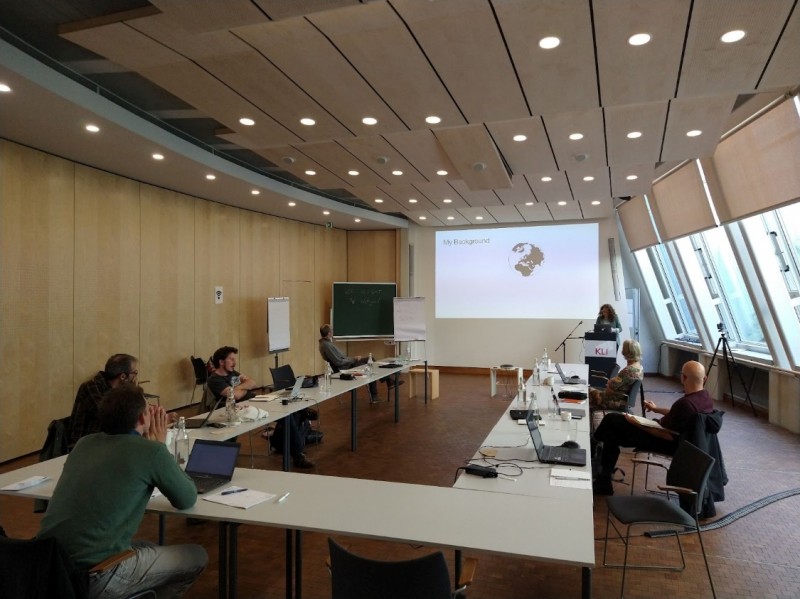 Researchers are received at the KLI, after which new team members give an introductory presentation to show what they can bring to the table. 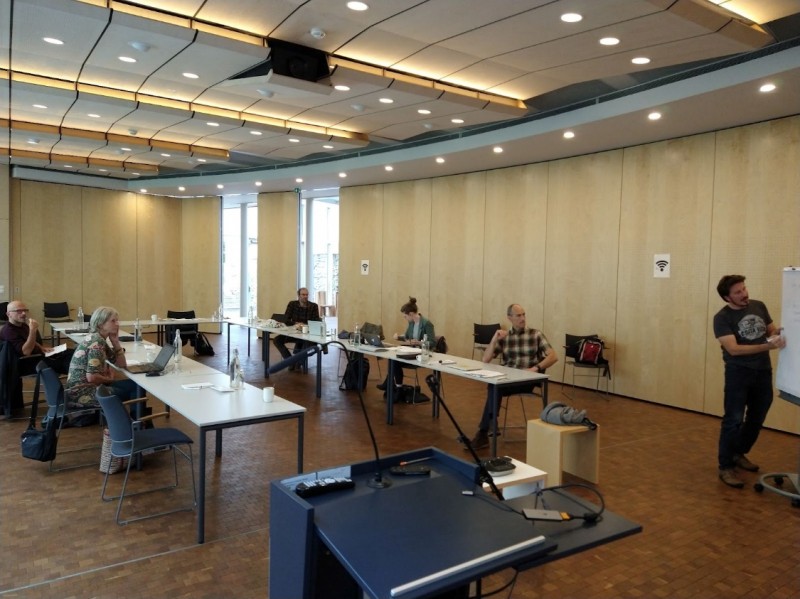 The team brainstorms on the goals of the perspective paper; Tom presents his idea on how the document could be structured. 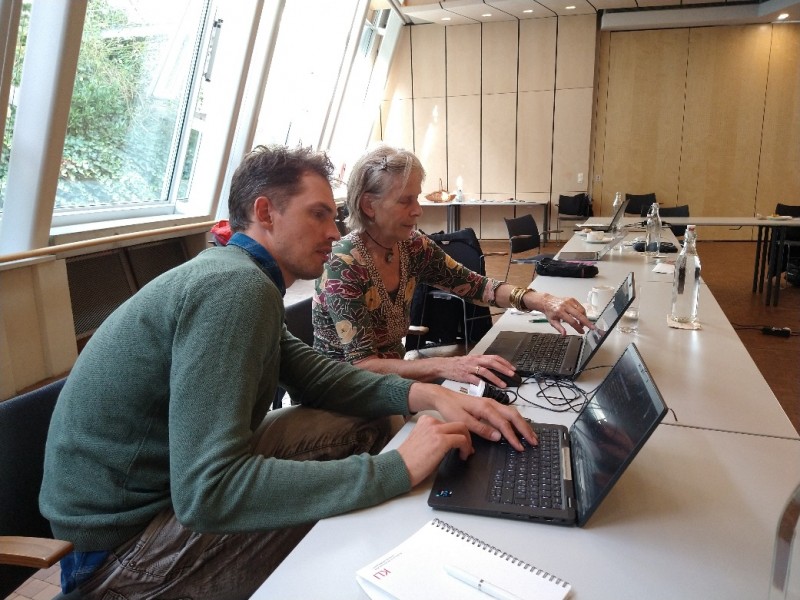 Afternoon: the team splits up in smaller groups to do some collaborative writing on the perspective paper. Peter and Monique are hard at work… 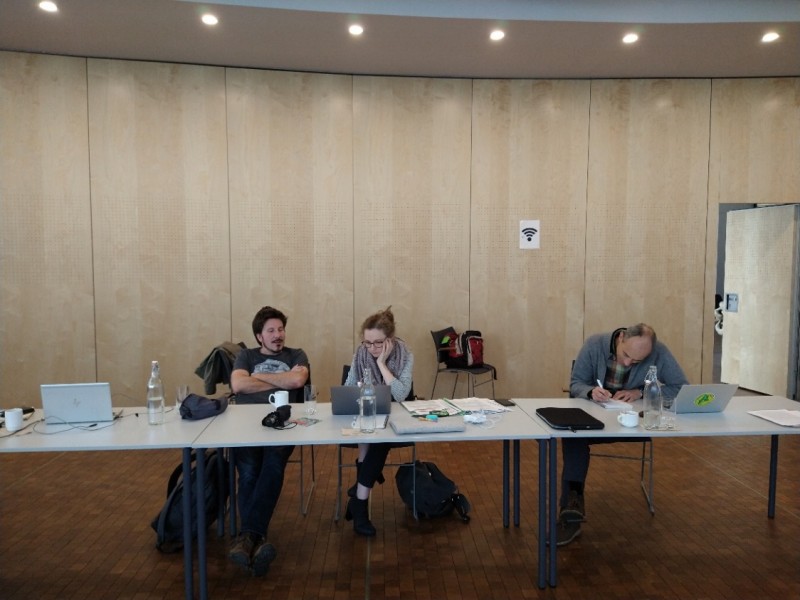 Tom and Laurel go over an introductory piece together, while Tim summarizes the afternoon discussion. 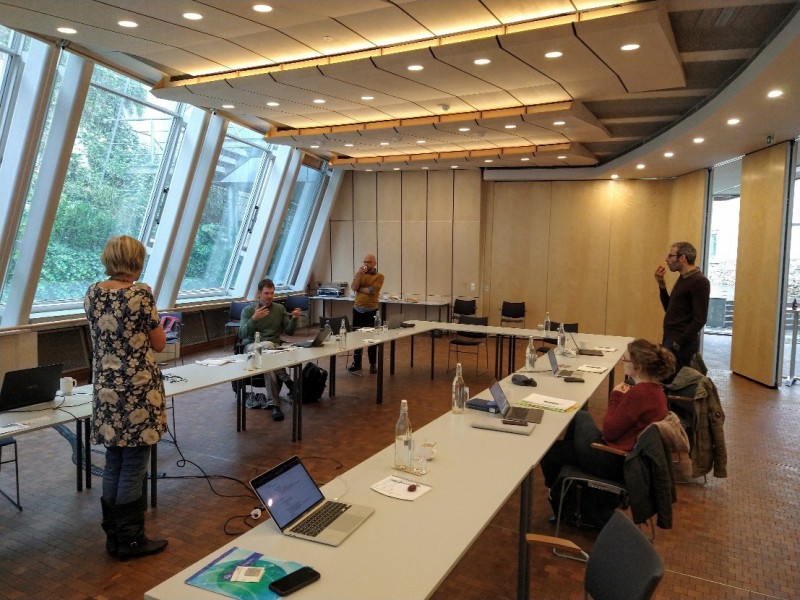 Even during the morning coffee break, the discussion keeps going! Peter shares ideas on the creation of a second paper to illustrate what evolutionary theory could contribute to social-ecological systems thinking. 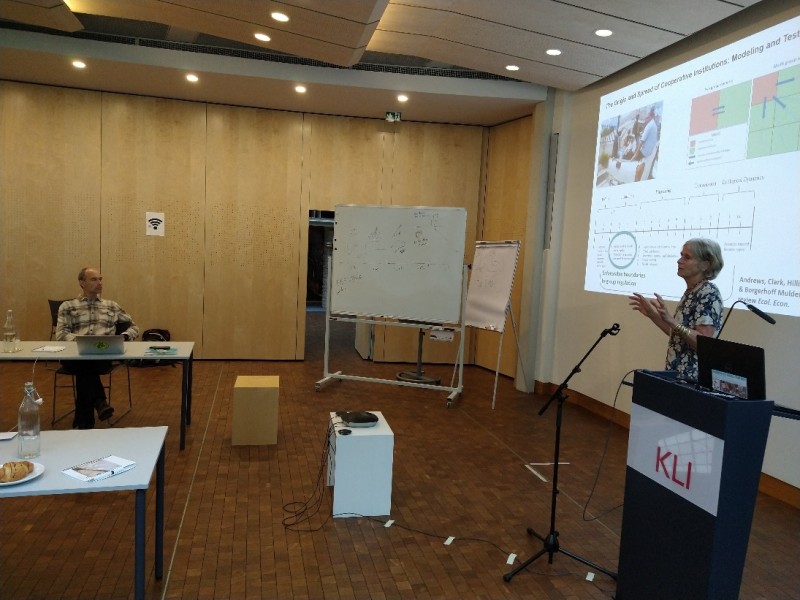 Monique suggests testing the usability of evolutionary theory to social-ecological systems thinking by building a model involving one of her study subjects. 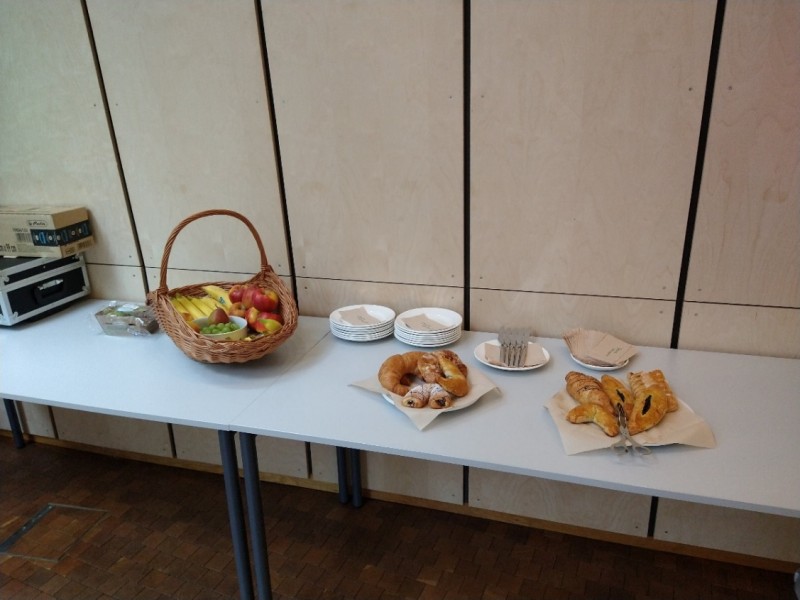 Throughout the day, healthy and somewhat-less-healthy (but tasty!) snacks were readily available to participants. 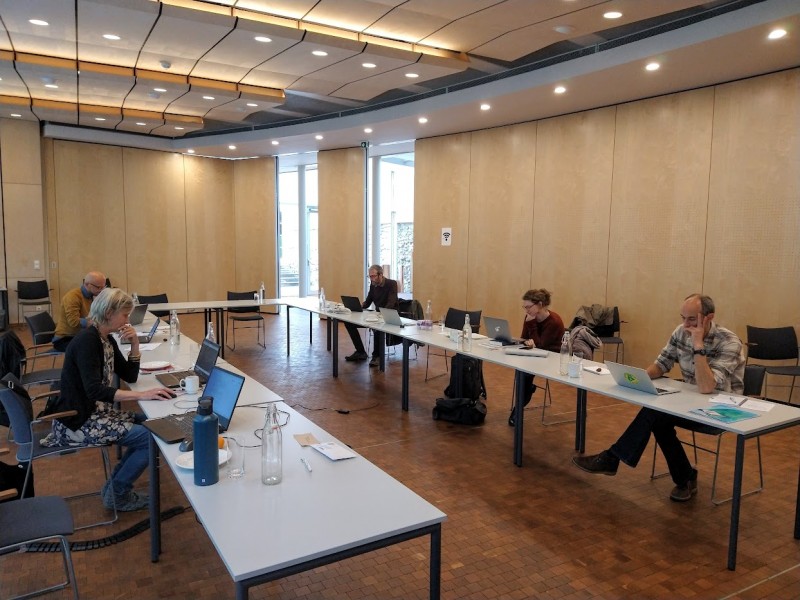 In the afternoon, everyone continued to work on the perspective paper, rewriting and refining the paragraphs that they took upon themselves to complete. 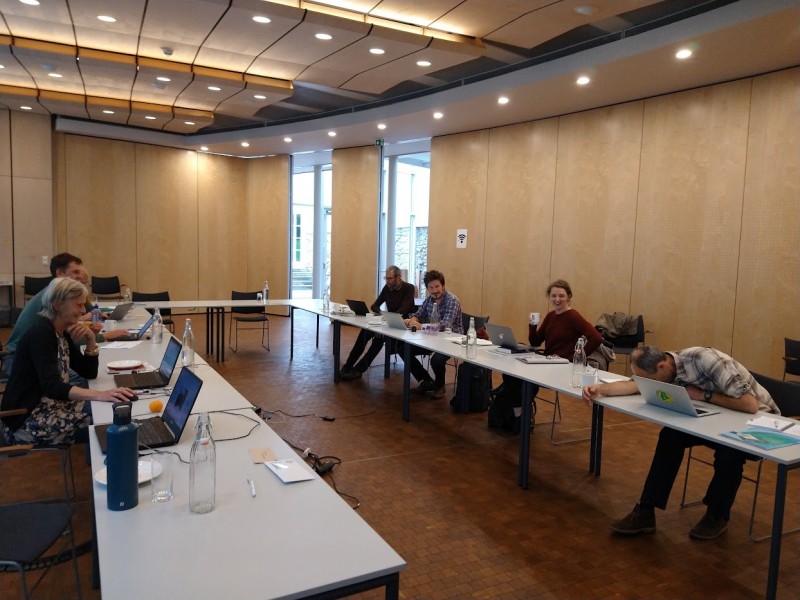 The hard work wore down some of the participants, as Tim felt the toll of leading the team through the writing stages. Laurel, however, is brimming with energy after her 7th cup of coffee for the day! 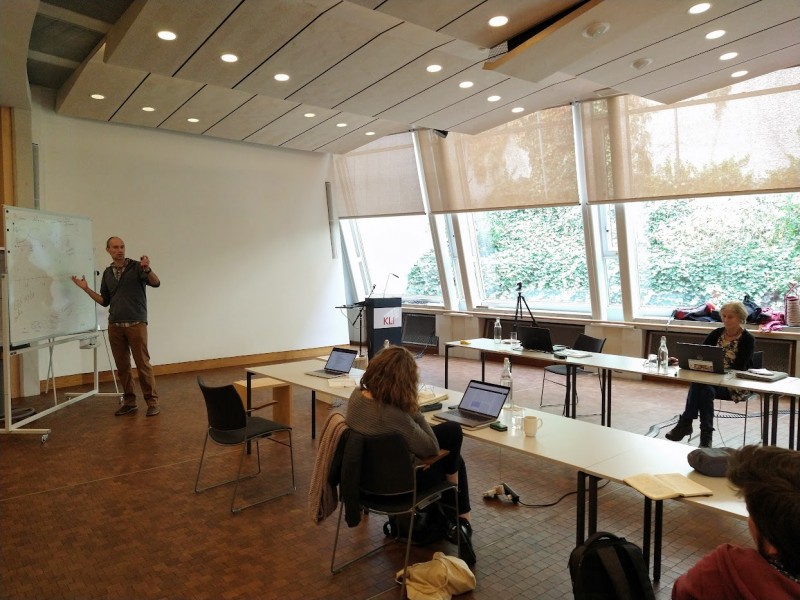 In the morning, Tim presented the ETII hypothesis (evolutionary transition in inheritance and individuality) as a possible theme to introduce in the new paper. 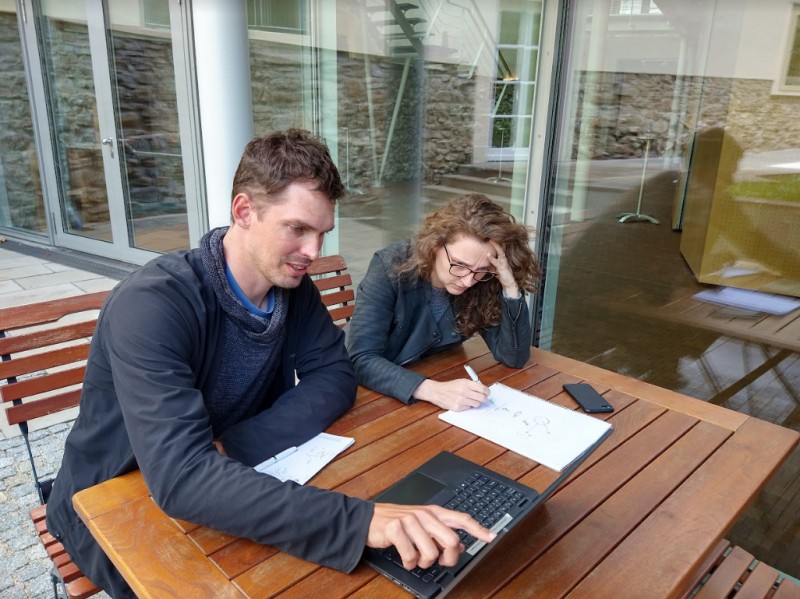 The afternoon featured sunny weather and pleasant temperatures, so the participants decided to create some breakout groups outside. Peter and Laurel discussed the possibility of integrating niche construction in the new paper… 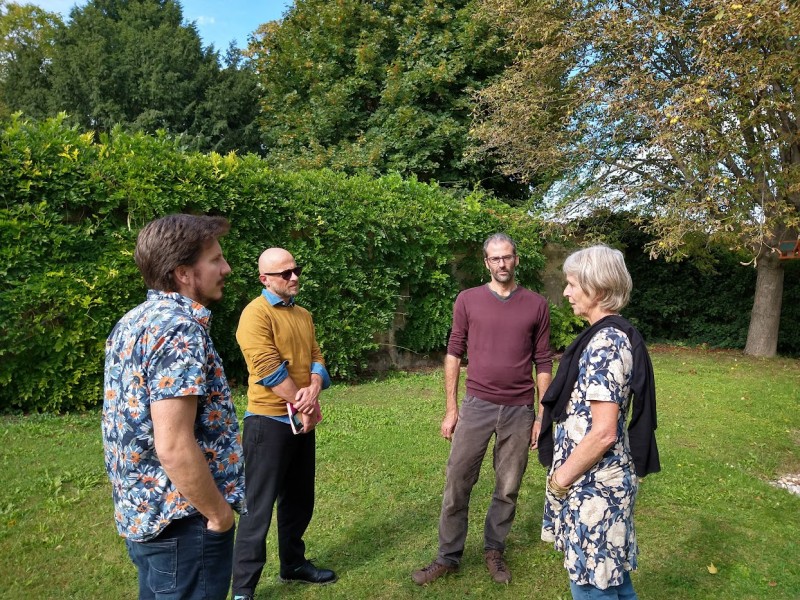 Meanwhile, Monique, Alessandro, Guido, and Tom had a chat about the goal of the paper in the garden of the Konrad Lorenz Institute. 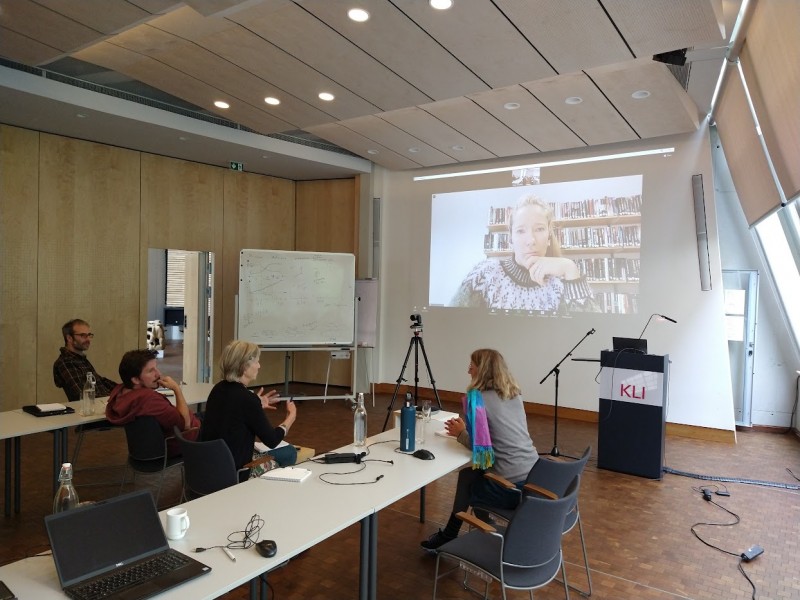 The day started off in an exciting fashion, as Jamila Haider was finally able to join the workshop, albeit digitally. Nevertheless, the team had a lively discussion with her concerning what evolutionary theory can mean for Social-Ecological Systems research. 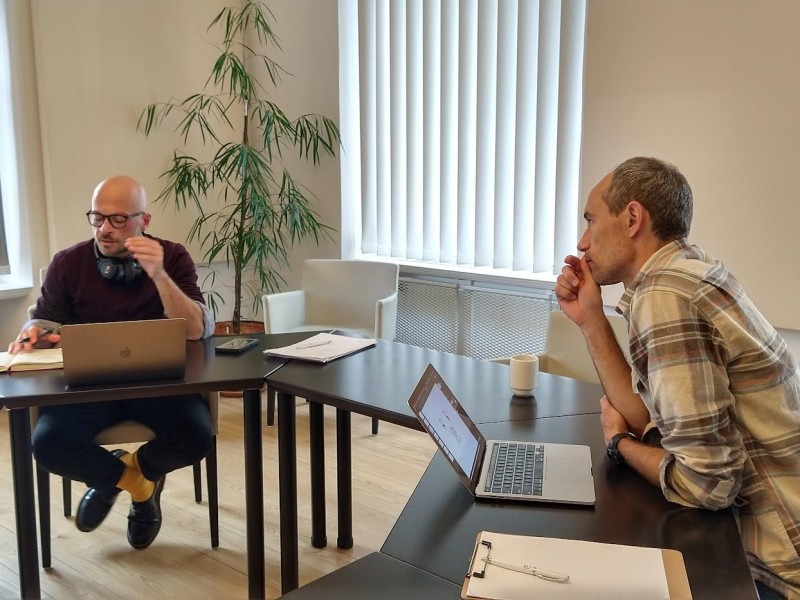 Once again, the participants split up into smaller groups to better tackle the challenges of interdisciplinary collaborative writing. Here, Guido and Tim are discussing the structure of the Perspectives paper. 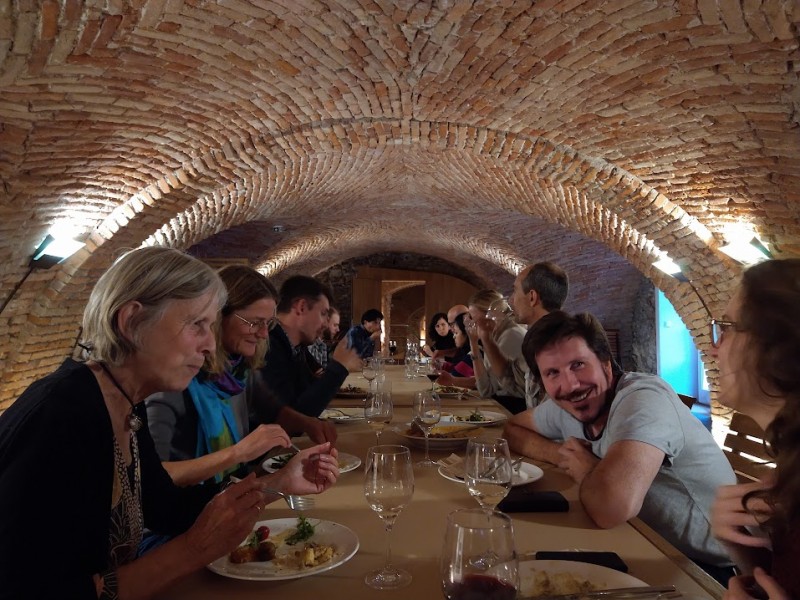 At the end of Thursday, participants joined the fellows of the KLI for a vegetarian dinner hosted in the spacious cafeteria of the institute. 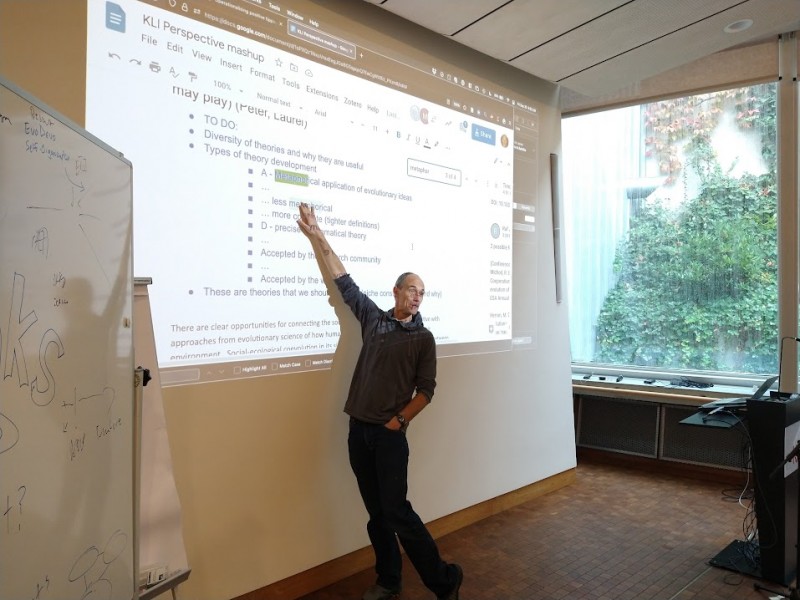 Even on the last day, productivity was high. Tim once again took the reins and divided the work that would have to be done after the event. In the early afternoon, the majority of the group took a taxi to the airport. 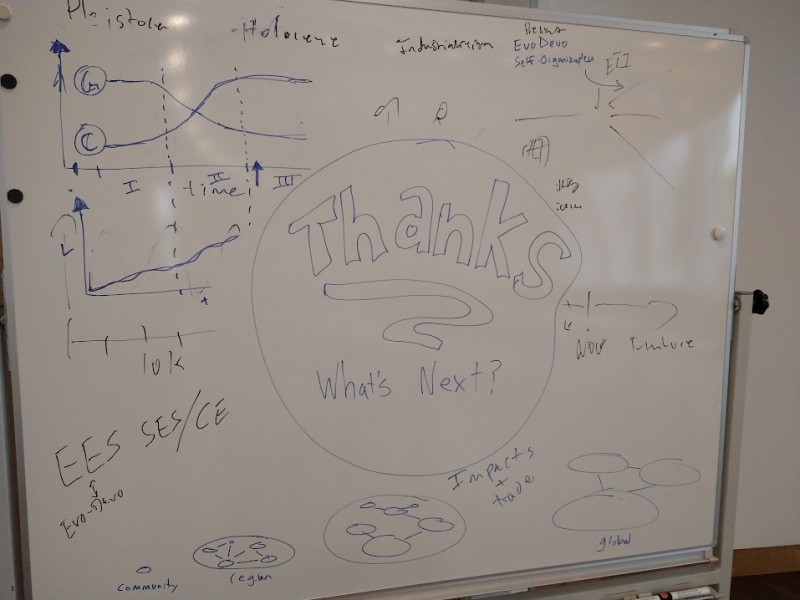 Overall, everyone agreed that it was a productive and enjoyable week, thanks to the hospitality of everyone involved at the KLI.